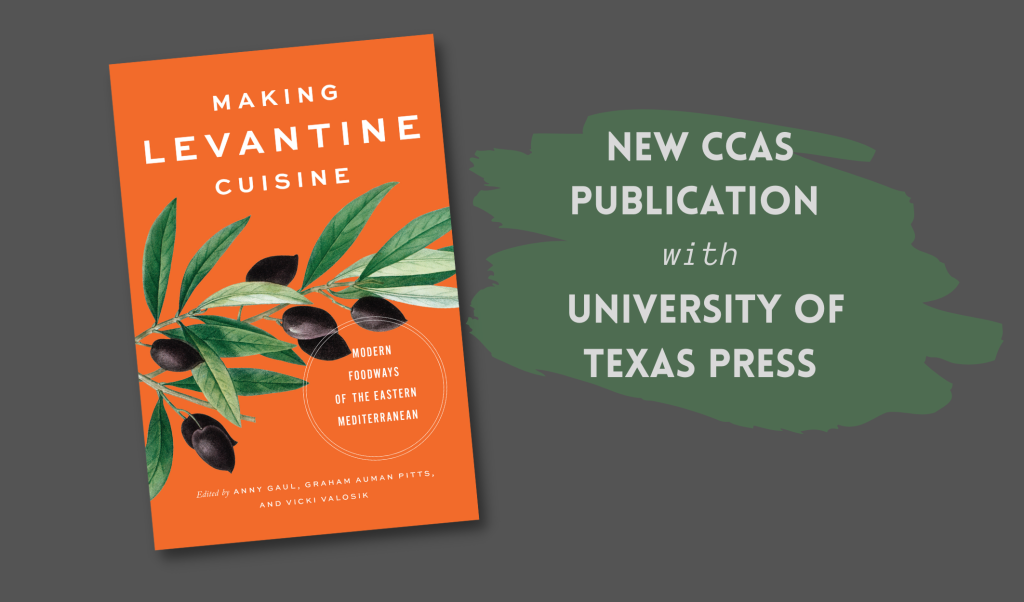 CCAS is pleased to announce the publication of Making Levantine Cuisine: Foodways of the Modern Mediterranean by the University of Texas Press.The volume, edited by MAAS alum Dr. Anny Gaul (‘12), CCAS Adjunct Assistant Professor Dr. Graham Pitts, and CCAS Editorial Director Vicki Valosik, sits at the intersection of food studies and Middle East studies, bringing much-needed scholarly attention to the region’s culinary cultures and the intertwining histories and migrations of its foods.

Making Levantine Cuisine offers a diversity of perspectives—from scholarly articles that examine local, regional, and global aspects of Levantine foodways to personal essays and recipes that reflect first-hand and lived culinary experiences. “The contributors come from a range of career stages and disciplines, and include authors with culinary, not just scholarly, expertise,” writes Gaul. “As a result, the book’s chapters provide a range of distinct (though connected) contributions: substantiating and historicizing the appropriation and erasure of Palestinian and Armenian foodways; revealing the often-overlooked role of women and rural workers in cultural production; and critiquing the labels––national and otherwise––that are frequently appended to Levantine foods.”

In addition to the book’s three editors, several of its contributors are also members of the CCAS community. MAAS alums Dr. Samuel Dolbee (‘10) and Dr. Chris Gratien (‘08) coauthored the chapter “Adana Kebabs and Antep Pistachios: Place, Displacement, and Cuisine of the Turkish South,” which explores how foods from Syria’s borderlands were incorporated into Turkish national culinary traditions. Second-year MAAS student Antonio Tahhan—also a food writer and chef—contributed the essay “Pistachios and Pomegranates: Vignettes from Aleppo” about his experiences studying Syrian food culture as a Fulbright scholar. Gaul’s conclusion to the volume includes a poem by Palestinian-American Zeina Azzam, who served in numerous roles at CCAS, including assistant director, during the Center’s foundational years.

Ultimately, Making Levantine Cuisine seeks to address two main questions: What is the history of the Levant’s cuisine? And why has so little scholarly attention been paid to this topic? It was this lack of scholarship that inspired Pitts, the former American Druze Foundation Fellow at CCAS, to suggest that the Center host a critical food studies symposium, and eventually produce the book, to address these topics. “In working on a book manuscript about Lebanon’s World War I famine, I realized that the project lacked sufficient grounding in how food was produced and consumed before the war. There was precious little existing scholarship on which to rely. So, I was really lucky to be at CCAS, which had the resources to support the symposium, and to be able to collaborate with Anny Gaul and Vicki Valosik on the volume. Now, we hope, others who approach this topic will be able to build on the collective work we have done.”

The symposium, which the Center hosted in summer of 2019, was organized by Pitts and CCAS Events Manager Maddie Fisher. The day-long event brought together scholars, journalists and food writers to share research and workshop papers, many of which are included in Making Levantine Cuisine. CCAS also sponsored a public event at the Freer and Sackler Galleries, the Smithsonian’s National Museum of Asian Art, featuring talks by several of the chapter authors. The symposium culminated in a collaborative, hands-on cooking demonstration in Georgetown’s dining hall kitchen. The demonstration was led by Antonio Tahhan, who designed a menu of Aleppan dishes, and Laila El Haddad, who featured dishes from Gaza.

“After a day of reading academic papers about Levantine cuisine from diverse academic disciplines, we crowded around kitchen tables to put theory into practice,” remembers Tahhan. “We commandeered the dining hall with lively Arabic music and dedicated prep stations. One for shaping makrouta, irresistibly crumbly shortbread cookies stuffed with a fragrant date filling. Not far away was the group rolling thin sheets of dough for Armenian lamb pies, lahm b’ajeen, a staple in cities with Armenian communities from Aleppo to Beirut. Those who wanted a challenge tried their hands at kbeibat, Assyrian-style semolina-bulgur dumplings stuffed with a spiced lamb kofta filling. These intricate dishes lend themselves to communal preparations. Between chopping and kneading, rolling and pressing, conversations meandered and meaningful connections were made. Cooking is not practice that exists in isolation, but something that is made, collectively, over generations. The title, Making Levantine Cuisine, is a nod to this collaborative process—one that honors practical culinary knowledge alongside more theoretical academic perspectives.”

The symposium and cooking workshop set the tone for the balance the volume seeks to strike between scholarly inquiry and practical know-how. “Bringing together historians, anthropologists, and literary scholars, but also poets and food writers, [Making Levantine Cuisine] is interdisciplinary in the truest sense of the term,” wrote Andrew Arsan, author of Lebanon: A Country in Fragments. “Taken together, these enlightening essays do more than simply provide us with new insight into Middle Eastern foodways: they also open up new conversations and suggest new ways of looking at the world.”

It is this view of food as a lens into cultures and histories that the volumes editors hope readers will take from the book—which has already sold out of its first print run. “The cooks, kitchens, and landscapes of the modern Levant have produced some of the most popular foods in the world today, within and beyond the wider Arabic-speaking world: hummus, shawarma, tabbouleh, and more,” writes Gaul. “Yet there is surprisingly little scholarship on, say, the politics of kibbe, the cultural meanings of mahshi and dolma, or the history of falafel. My co-editors and I envisioned this book as a first step towards addressing that fact…We hope it is an invitation not only to readers but also to scholars and writers working on the region to consider food as a way to understand history, politics, and culture from a new perspective.” 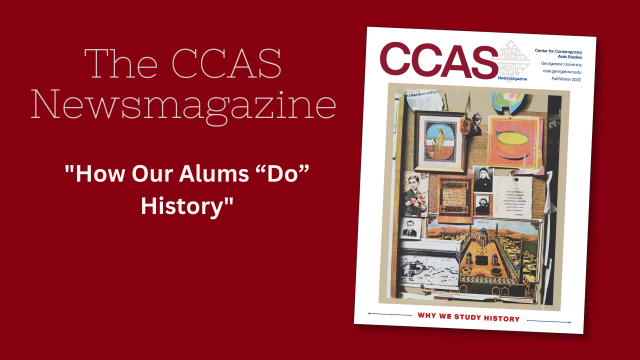 How Our Alums “Do” History

From food to film, biographies to trans-national stories, MAAS alums are bringing diverse approaches to the study of history. 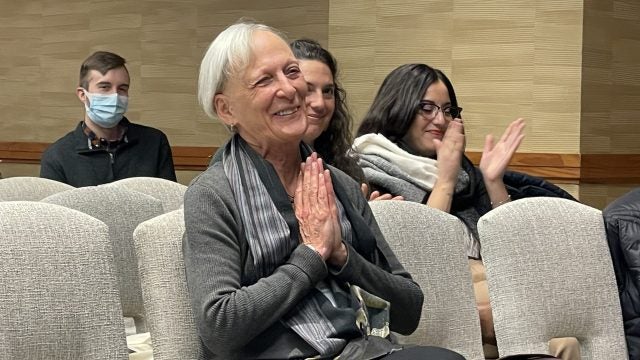 A Giant in the Field of Middle East History

Scholars from around the world discuss the lasting impact of CCAS Prof. Emerita Judith Tucker's scholarship on Middle East history… 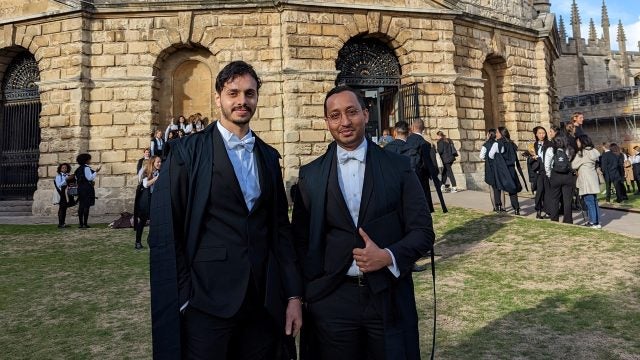 From CCAS to Oxford: An Interview with MAAS Alumni

In this interview, Coco Tait speaks with alumni Motasem Abuzaid (MAAS ‘22) and Azim Wazeer (MAAS ‘21), who are both currently doctoral candidates in politics at St…