Title: Collaborations in Literature and the Arts

This spring CCAS Education Outreach continued to use a virtual format for all of its programming, which included annual events, collaborations with other university centers and partners, and multiple customized workshops for school districts and individual schools. Over the semester, our 11 major outreach events reached more than 500 educators across the country. 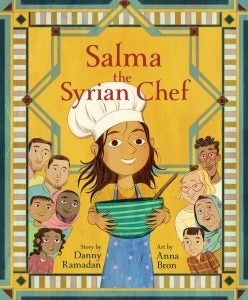 Following last year’s interruption due to the pandemic, we were pleased to resume our annual event on children’s and youth literature conducted in partnership with Howard University’s Center for African Studies and School of Education. This year’s event, held virtually in April, was themed around “asserting identity in children and youth literature.” The diverse roster of speakers included Dr. Muhammad Fraser Rahim, who discussed his autobiography of enslaved African Omar bin Said; award-winning authors Aya Khalil (The Arabic Quilt) and Patricia Elam Walker (Nana Akua Goes to School); and educator and linguist Dr. Rabiah Khalil Abdullah, who presented on classroom approaches to Masoud Hayoun’s memoir When We Were Arabs: A Jewish Family’s Forgotten History. Also among the spring online events was the third annual webinar for the World Area Book Awards, which showcases authors from five world regions’ book award programs. This year’s event featured author Danny Ramadan, Middle East Outreach Council book award winner for Salma the Syrian Chef. The book, which is intended for readers aged four to seven, beautifully represents Syrian culture through a meal that protagonist Salma prepares, while the diverse cast of characters speaks to the power of cultivating community in challenging circumstances.

This year was marked by increased collaboration with other Middle East outreach centers—both those with and without U.S. Department of Education Title VI National Resource Center grants. Rather than meeting just once a year at the Middle East Studies Association, as in the past, outreach directors have been meeting regularly via Zoom, sharing calendars and announcing one another’s events, as well as inviting co-sponsorship and shared speakers. This has reaped dividends of increased audiences and cost sharing. CCAS participated in two such shared events, offering speakers on Indian Ocean trade for the Office for Resources in International & Area Studies (ORIAS) at the University of California, Berkeley, and on the history and culture of the Swahili coast at Boston University’s African Studies Center. A spring symposium for the Virginia Inquiry Collaborative titled “Changing the Narrative in World History” involved teachers from seven school districts who heard from scholars at multiple universities with Title VI National Resource Centers. This symposium marked a milestone for the more than two decades’ work with Fairfax County Public Schools’ innovative leadership in world history.