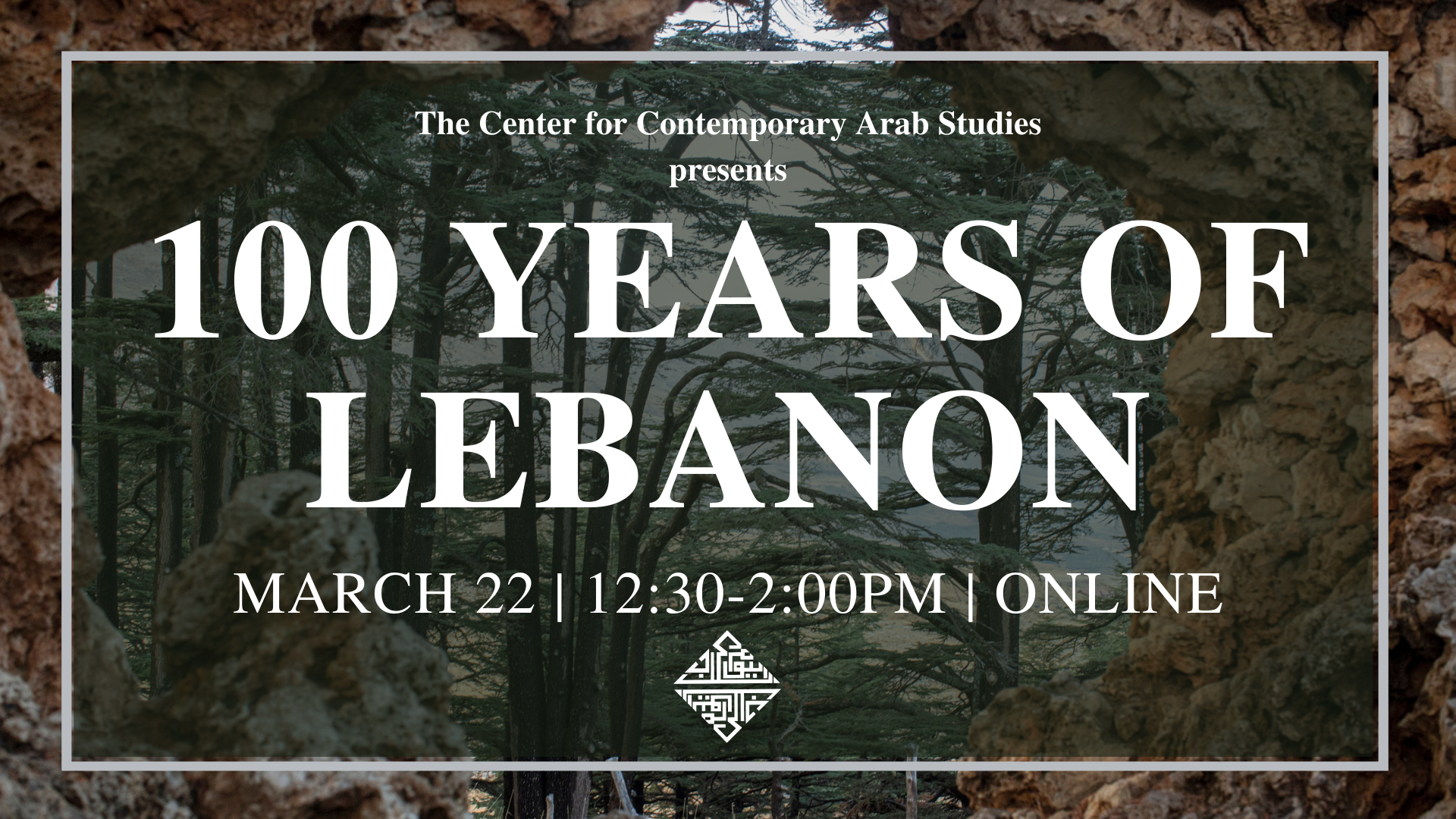 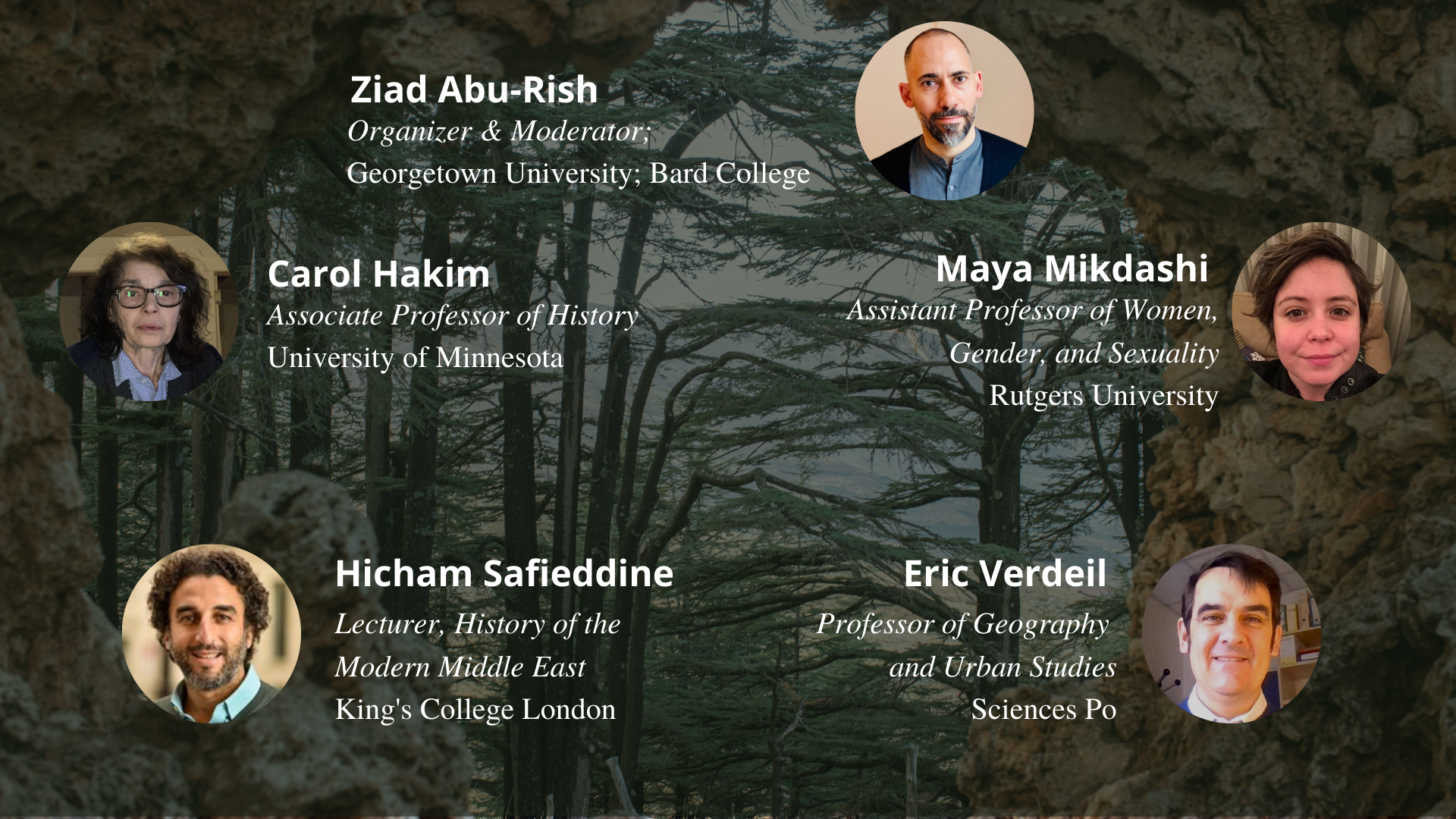 On March 22, CCAS and the Arab Studies Institute partnered to present the scholarly panel “100 Years of Lebanon.” The panel was organized and moderated by Dr. Ziad Abu-Rish, a 2002 MAAS alum and one of the 2020-2021 American Druze Foundation fellows at CCAS.  Abu-Rish is working on a book manuscript entitled The State of Lebanon: Popular Politics and Institution Building in the Wake of Independence (1943–1955) and recently published the chapter “Lebanon beyond Exceptionalism” in A Critical Political Economy of the Middle East and North Africa (Stanford University Press, 2020).

Dr. Carol Hakim, Associate Professor of History at the University of Minnesota, opened the panel, tying in research from her book The Origins of the Lebanese National Idea 1840-1920 (University of California Press, 2013). She offered various interpretations of the Lebanese nationalist project and how it has changed over the past 100 years, particularly given a shift in the historiography of Lebanon following the civil war. Hakim argued that early historiography reveals that the origins of Lebanese nationalist thought was born out of a clash of early Lebanese, Syrian, and Arab nationalist movements. The nascent state’s claims to legitimacy were highly contested by conflicting historical narratives in the different nationalists movements. She explained, “Nationalist visions were not formed outside the political field…but they emerged during and from the various interactions and engagements between different movements, political programs, and nationalist visions within the political field.”

Dr. Eric Verdeil, Professor of Geography and Urban Studies at Sciences Po, discussed the Lebanese diaspora, migration within and out of the country, and how these factors affect sectarian divisions in Lebanese society. His framework of “territorial disjunction” shows how many Lebanese do not vote in their place of residence, but rather in areas where they are only administratively attached. For example, eighty percent of Beiruti voters voted in absentia in 2016. Verdeil highlighted that territorial disjunction has been an issue since the beginning of the national project. This lack of connection between voters and the areas where they are registered is mobilized to strengthen the interest of various groups and serves to exclude some groups in Lebanon from political participation. Abu-Rish commented that Verdeil’s work is an important intervention in the renewed conversation about the role of the Lebanese diaspora as “saviors” of the state versus a dangerous, dramatic outflow of citizens.

While much of the discussion in academia related to Lebanese state formation is about what has changed, Dr. Maya Mikdashi wanted to shed light on consistencies in Lebanon’s legal and bureaucratic systems. A 2004 MAAS alum, Mikdashi is Assistant Professor at the Department of Women’s, Gender and Sexuality Studies and a lecturer in the program in Middle East Studies at Rutgers University. She shared research related to her forthcoming book with Stanford University Press, Sextarianism: Difference, Power, and Sovereignty in Lebanon. Building on ten years of archival research at Lebanon’s highest civil court, Mikdashi analyzed a 1932 inheritance court case of a Lebanese woman who lied to a census taker in order to erase her marriage from the legal record. Examining veracity in the 1932 census in Lebanon through this case reveals how the Lebanese “may have used the world-making technology of the census to make new worlds for themselves. A lie becomes the origin of a origin story parallel to the state,” Mikdashi explained. The census intertwined the stakes of sexual and sectarian difference—what Mikdashi calls “sextarian difference”—at the time of state formation.

Our final panelist, Dr. Hicham Safieddine, questioned how scholars working today at the crescendo of the crises in Lebanon can make their work relevant. Safieddine is Lecturer in the History of the Modern Middle East at King’s College. In the summer of 2019 he published Banking on the State: The Financial Foundations of Lebanon with Stanford University Press. Less than two years later, the collapse of the Lebanese lira and closure of banks has led to wide-scale impoverishment in the country. Safieddine examined the longstanding and institutional tie between the banks and the state, which had largely been ignored before the recent financial crisis. He posited, “Since Lebanon’s formal political independence in 1943, the bankers have counted on the state more so than the market to produce the uneven structure of Lebanon’s economy. In doing so, the banking system preserves the power of the mercantile financial class that benefits from this inequality.”

The panelists from this event are expanding their talks into a series of articles that will be published by Jadaliyya in the coming weeks. Check CCAS social media for updates on when these articles and the event video will be available.

Maddie Fisher is the CCAS Events Coordinator and a first-year student in the MAAS program.