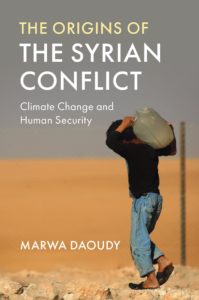 Dr. Marwa Daoudy is Assistant Professor of International Relations at CCAS. Her new book, The Origins of the Syrian Conflict: Climate Change and Human Security (Cambridge University Press, 2020), offers a new framework for evaluating the claim that climate change caused the Syrian uprising. Below, Dr. Daoudy answers a few questions about her research.

What made you want to write this book?
Dr. Daoudy: Over the past few decades, a new narrative has emerged that seeks to link climate change with political and social unrest. More recently, this climate-conflict narrative has been applied to the Syrian case. According to this logic, climate change caused the 2006-2010 drought in Syria, the drought caused agricultural failure, agricultural failure caused poverty, and the resulting displacement and discontent culminated with the 2011 uprisings. I wanted to question this narrative both conceptually and empirically as it obfuscates the responsibility of decision-makers and denies agency to vulnerable migrants who suffered from drought, displacement and then conflict. I also want to show that while global warming is real and international action is urgently needed, climate change was not what was at the forefront of the minds of Syrians in 2011. Instead, most people were focused on a moral ideal: the end of repression and social injustice.

How did you conduct your research?
Dr. Daoudy: My book draws on field research and my own background as a Syrian scholar to present primary interviews with officials and citizens, activists, and refugees, and the research of in-country Syrian experts to provide unique insight into Syria’s environmental, economic, and social vulnerabilities leading up to the 2011 uprisings. In doing so, I identify the ideological and policy drivers of human insecurity that impacted Syria’s water and food security. I explore how ideology shaped the policy decisions of the Syrian government under Hafez al-Assad and Bashar al-Assad and how these policies significantly contributed to the vulnerability of the rural population in the decades prior to 2011. Moreover, I design a multi-layered framework called Human Environmental Climate Security (HECS) to consider the role of economic and sociopolitical factors since the 1960s. This framework seeks to move beyond deterministic narratives that focus on population growth and resource scarcity to instead position vulnerability and sustainability at the center of environmental risk. It defines climate security as a series of threats and vulnerabilities posed not only by variation in climate conditions but also by political decisions that impact human and ecological life. Working in connection with the concept of vulnerability, resilience is a critical component of a community’s susceptibility to climate insecurity, but in Syria, resilience was relatively low due to poor governance, institutional weaknesses and a sudden shift to neo-liberal policies.

What are the major conclusions that you draw in your book?
Dr. Daoudy: I argue that government policies were at the heart of Syria’s vulnerabilities prior to the conflict. Political and socio-economic factors were ultimately more important than a climate-induced drought in the build-up to the uprising, a lesson that may find application in other case studies around the world on the interaction between climate change and human insecurity.