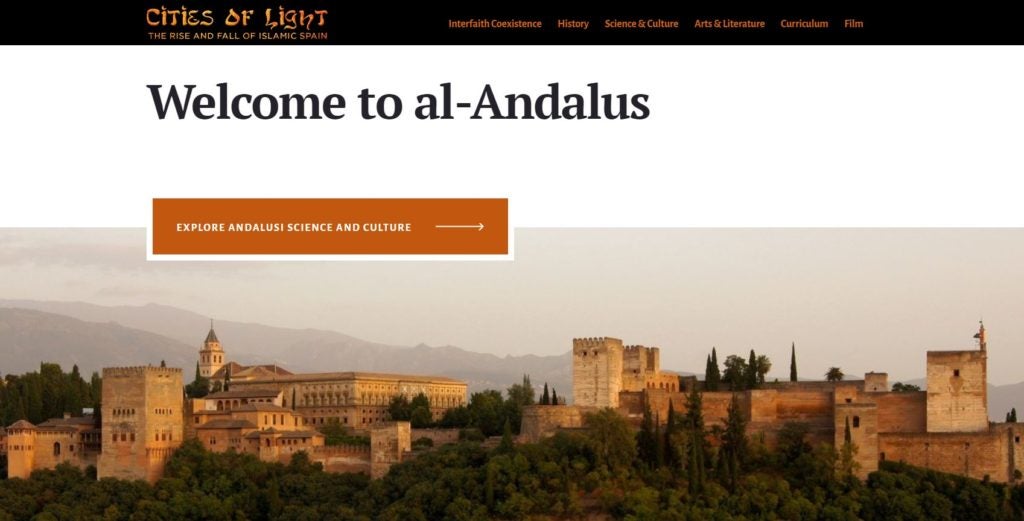 Unity Productions Foundation (UPF) recently released an updated interactive website on Islamic Spain built in partnership with CCAS. The website serves as a companion to the UPF film Cities of Light: the Rise and Fall of Islamic Spain and provides a detailed survey of the 700-year period of Muslim rule in the Iberian Peninsula and its significance to world history. The website features interfaith coexistence, timelines of battles and rulers, the development of scientific and agricultural technologies, arts, architecture, and literature, and glossaries and maps. Interactive units for students include learning 25 scientific and artistic subjects and finding Andalusian influences in our everyday lives.

CCAS Education Outreach Coordinator Dr. Susan Douglass served as an expert consultant on the original site’s design and curricular content to ensure that it meets teacher needs and state academic standards for world history. “The topic of Islamic Spain is important to teachers because it represents an exceptional place and time that defies the artificial division between Orient and Occident, East and West—when Muslims, Jews and Christians lived and interacted socially, religiously and intellectually under Muslim rule,” said Douglass. “This period of cultural exchange resulted in the transfer of scientific, artistic and technological advancements to Europe, as these exchanges did also in other parts of Afroeurasia.”

In addition to the advancements made in math, physics, astronomy, architecture, and medicine during this period, the website explores daily life in Islamic Spain, including food, music, art, and textiles. All of the artwork and artifact photos on the website are now under Creative Commons license and were updated by Eosin Chelius, a sophomore at Georgetown and a 2019-2020 BSFS Scholar at CCAS, who also worked on the site’s accessibility and design. He says that one of the most interesting tidbits he discovered while working on this project was was about Ibn Firnas, a Muslim mathematician who in 875 developed a glider and jumped off of a tower in Cordoba. “This was over one thousand years before the Wright brothers attempted a similar feat,” said Chelius. “Sources described him as staying aloft for some time, but due to a non-fatal back injury as a result of the experiment ibn Firnas decided to abandon his efforts at flying, yet he made history nonetheless.”

Chelius, who is majoring in international history and minoring in Middle Eastern history, says this is just one of many interesting discoveries he made. “While doing research for some parts of the website I kept coming across sources that considered the existence of al-Andalus somewhat of a footnote in history despite its great influence on European culture and even the development of the European Renaissance,” he said. “I hope that the website will help to fill this gap that exists in the teaching of the history of the Islamic world, and more importantly, European history.”

The website’s focus on original source material will make it a valuable tool for teachers and students alike. “The demand to teach with primary sources and critical examination of evidence requires that classrooms have access to the story of the transfer of knowledge that took place around the 12th century through the translation of scientific and literary works from Arabic into Latin,” says Dr. Douglass. “Those works had a long-term impact on both the flowering of the Renaissance and the later Scientific Revolution in Europe. This website takes students beyond the vague attribution of contributions to the West from “Muslim,” “Arab” or “Islamic” civilization, to show exactly when, where, how, by whom, and with what effects, these exchanges took place.”

The design and launch of this new website was supported by a U.S. Department of Education Title VI grant to Georgetown University that designates us a National Resource Center on the Middle East and North Africa (NRC-MENA).