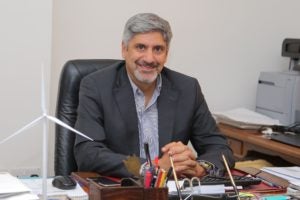 Judeh, who was born in Amman, says he became interested in the energy sector starting in 2006 when the Jordanian government was debating a draft law to regulate renewable energy. The law passed in 2010, requiring that within a decade at least ten percent of all energy produced locally must be renewable. Judeh had been following the success of wind energy projects implemented abroad and saw the potential for a wind farm in Jordan. However, with no precedent of renewable energy projects of that scale in Jordan to point to, the windfarm wasn’t an easy sell. Judeh set about commissioning studies on the viability of the project and working to convince authorities and private-sector investors of its economic feasibility. “We had to convince ourselves too,” he notes jokingly.

The 2011 uprisings that stirred protests and toppled governments across the Arab world added further complications, scaring investors who thought that Jordan might be next. On the other hand, pipelines transporting gas from Egypt to Jordan were cut during the unrest, reinforcing the need for securing other sources of energy, including renewables. Despite the challenges, Judeh raised $287 million to launch the project. He credits his fundraising success, in part, to his time at Georgetown, first as an undergraduate business major and then in the MA in Arab Studies program. “As a student at Georgetown University, I learned a lot about the Middle East—knowledge that helped me negotiate with banks and investors in the region,” says Judeh.

To determine the best place for his turbines, Judeh conducted a two-year wind measurement study. He decided on Tafilah, a town about 180 kilometers southwest of Amman, due to the strength and constancy of its winds. The construction of the windfarm would also bring approximately 450 needed jobs to the area. Tafilah—once the seat of the Edomite Kingdom and the site of important battles during the 1916-1918 Arab revolt—is known today for high poverty and unemployment rates that have motivated protests in recent years.

With funding and a site for the windfarm secured, the next step for Judeh was an environmental assessment. There were concerns that turbines might impact bird migration in the region due to Tafilah’s proximity to the Dana Nature Reserve, as well as its location within an important migration corridor. When studies showed that the wind farm could jeopardize kestrels, buzzards, and vultures, the company moved its planed turbines to another location. As part of his contract with funders, Judeh says he continues to maintain a team of on-site, expert bird monitors who shut down the turbines if they see bird flocks flying too close to the farm.

After two years of construction, the windfarm was inaugurated in 2015 with a production capacity of 117 MW. This represented roughly three percent of all energy—not just renewable—generated in Jordan at that time and enabled the government to save $50 million a year in reduced oil imports. 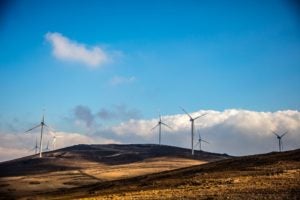 Judeh, who is now exploring the prospect of founding other renewable energy projects, says that creating the first and largest project of its kind in the region was like “breaking through stones.” And yet, his efforts paved the way for approximately 30 new renewable-energy projects that have since been launched by other companies. “We created this industry in Jordan,” says Judeh. “Officials and lenders became more comfortable with it, and we put the country on the map of renewable energy.”

Diogo Bercito, originally from Brazil, is a journalist and second-year student in the MAAS program. This article was originally published in the Fall 2019 issue of the CCAS Newsmagazine.