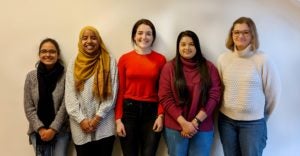 CCAS is pleased to participate in the competitive Bachelors in Foreign Service (BSFS) Scholars Program, which enables undergraduates to work on substantive research projects with faculty from across SFS. Scholars work on professional projects, conduct advanced research, get to know graduate faculty and master’s students, and engage in the intellectual life of the Center. For AY 2019-2020, CCAS faculty are working with the following twelve scholars:

Research Assistant to Prof. Rochelle Davis on developing and editing a website on Islamic Spain

Eosin is a sophomore in the SFS and plans to declare as an International Politics major with a concentration in security studies. Additionally, he is working toward an Arabic minor and studied Arabic last summer in Amman, Jordan.

Zachary is a junior in the SFS majoring in Regional and Comparative Studies in the Islamic World and minoring in Arabic.

Julia is a junior studying Culture and Politics in the Walsh School of Foreign Service. Within the Culture and Politics major, her main focus is the connection between forced political displacement and healthcare access — an interest I began to develop during my freshman year at Colgate University. She is deeply passionate about exploring issues related to the ongoing migrant and refugee crisis, and looks forward to studying these issues within the context of the Middle East with CCAS this year.

Davis is a sophomore in the School of Foreign Service studying International Political Economy. He is most excited about minoring in the Persian language and hopefully pursuing a self-defined certificate program concerning Persian and Arab relations. His main area of interest and the focal point of my studies is Persian culture and Iranian relations. His research is focused on an international Baghdadi merchant family and their business affairs throughout the world.

Helen is a senior studying International Politics in the SFS, as well as a first-year accelerated student in the Masters of Security Studies Program. While at Georgetown, she has worked in the public, private, and non-profit sectors, as well as pursued international work experiences in Brussels and Amman. She also serves as Managing Editor of the Georgetown Journal of International Affairs. Her research interests include GCC relations, US foreign policy in the Middle East, and public-private collaboration. She has always been drawn to the Middle East and recently spent four months living and interning in Amman, as well as five months studying at King’s College London.

With Dr. Adely’s team, Ankushi is working on a project on education-to-labor transitions in Jordan to highlight constraints and opportunities in the country’s education space. She also works on issues of mobility, displacement, and democratization with Dr. Lahra Smith in the African Studies Program and Dr. Daniel Brumberg in the Government Department. She is a Junior Centennial Fellow to Sheba Crocker and a Figge Fellow at the Catholic Studies Program. Ankushi is interested in the dynamics of displacement, conflict transformation, and democratization in the Middle East and Africa.

Mena is a senior studying Science, Technology, and International Affairs with a certificate in Arab Studies. She is focused on understanding the intersections of displacement and international development in the Arab world. On campus, she assists with research on youth development and education at the Center for Contemporary Arab Studies and works at the President’s Office. Previously, Mena has supported research at the Library of Congress and interned at Jesuit Refugee Service/USA, where she worked on political advocacy for refugees and migrants. In the future, Mena hopes to pursue further study into migration and urbanization with a focus on the Middle East.

Bushra is currently a junior in the School of Foreign Service. She is undertaking a comparative major studying the Middle East and South Asia from a human rights lens. Bushra’s research interests include peace & conflict, women’s rights, migration and sustainability. At the Center, she will be supporting Prof. Marwa Daoudy’s research in human security among other topics. She is excited to be a part of this thriving community of undergraduate researchers at Georgetown and hopes to grow as a critical thinker and writer.

Clara is a third year French SFS student majoring in International Politics. She has always been particularly interested in the Middle East, its culture, history, and politics. As an undergraduate scholar she is researching a variety of topics, but has more recently focused on a less known wave of Musa Dagh Armenian refugees in 1939 into Lebanon. She has been looking into the camp conditions in Tyre and Anjar with the goal of finding Armenian testimony. On a larger scale she is also researching diseases such as malaria and typhus in those areas and how they were dealt with.

Ömer is a sophomore in the School of Foreign Service from Istanbul, Turkey. He is majoring in International Economics, and possibly minoring in Persian. This year, he is working with Professor Rochelle Davis on research concerning the fate of Syrian Refugees in Turkey in the scope of changing perceptions of the Turkish community in recent years. Through this research, he is hoping to vocalize a newly-emerging serious matter as well as gaining research and analytical skills along the way.

Taryn is a senior majoring in Regional and Comparative Studies focusing on religion and conflict in the Middle East and North Africa and minoring in Arabic.